So it soon became clear after my first draft of the spreadsheet that our little nature reserve in Brighton, the Deneway, had zero records. I couldn't release too much about the spreadsheet until this had been rectified, so a chance encounter with Huw Morgan on Friday was very welcome. I had two hours in this fenced off reserve to record as much as I could yesterday whilst a volunteer party bashed away scrub. I wasn't expecting to add anything to the master list OR my list but I did both!

It took me 11 minutes to take the Deneway from 32nd place (bottom) to 31st, beating our part of Withdean Woods. About an hour later and the Deneway was ahead of Marehill Quarry in 30th place. The highlight for me was a surprise encounter with two patches of cobalt crust. This striking encrusting fungus is an easy one to identify and I didn't expect it at all yesterday being a new species to me. I also added the naturalised bay laurel which is scattered throughout the site. This was also new to the master list, along with...chives?! Two unwanted species added to the list and nothing to celebrate really but it's diversity of a kind.

You see the Deneway is a half mile strip of woodland and scrub along the railway line. It's only about 10 or 20 metres wide and is hemmed in by houses on one side and the railway track on the other. So garden waste and escapes are rife. It's a low priority for monitoring for me compared to all those SSSIs and SACs but I'm glad I got in there and got a few records made. I added 77 species. 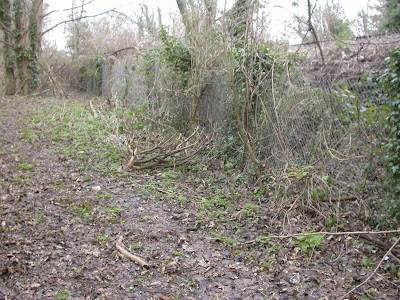 This came to 18 birds (best being Bullfinch), 5 crustaceans (including landhopper), one fern, one conifer, 28 plants, 7 fungi, a moth, a bug (so only 2 insects), a liverwort, 2 millipedes, 7 mollsucs, 4 mosses and a mammal. That was me. The first record I made there was Human which makes this our most widespread species and the only one to be recorded in all 32 reserves. It just goes to show that you can find something new pretty much anywhere! Casual recording is a really valuable tool for understanding sites, it's not as good providing insight into management as structured surveillance and monitoring but it certainly has its place. The reserve network list is already on 9790 species.