Back in 2009, we carried out many surveys at Ebernoe Common including one looking specifically at deadwood beetles with Mark Telfer and another looking more generally at invertebrates across the common with Mike Edwards. We are currently repeating the work with Mike Edwards seven years later so it's not easy to add new species of saproxylic invertebrate to the list but we have certainly done that over the last two months!

Back then, a lovely huge beech had lost its limbs, one every year for three years or so providing plenty of habitat at just the right stage of decay. It was where I first saw Platystomos albinus and cut mt my teeth on saproxylic invertebrates. Six or seven years later and the fallen tree has mostly passed through the exciting stage of decay. Most of the bark has fallen away, the fungi present are hard (lumpy brackets and ganodermas) and full of little other than Cis species. I suddenly remembered on the previous visit, a more recently fallen beech with intact bark. It also had on the April visit some very fresh oyster fungi which I figured would be nice and rancid by now. They were indeed. I broke one open and the following fell out.

Several staphs to be looked at later

A diverse mix but probably nothing new to the site. It was our very keen budding entomologist and trainee warden Oly Sayers who handed me a beetle I recognised instantly as the RDB3 Corticeus unicolor! Oly is close to the end of his placement with us at the Trust and he has only been out with me a few times but has proved to be good at finding rare and scarce deadwood invertebrates! It does also go to show however that the wood decay process is a dynamic process. A continuous supply of deadwood with various stages of decay is needed for a site to have a good saproxylic fauna. Everything always changes and that's also true for deadwood species. This is one reason why I have such a problem with log stacks, they promote the idea that wood decay is not a process but a static and continuously productive habitat. A log stack is really only marginally valuable for deadwood invertebrates for a few years when after that, it will mostly become a home to woodlice and centipedes and then worms (that's fine by the way - just don't kid yourself it's for deadwood invertebrates).

Anyway, back in 2011, I was with Mark Telfer when he found Corticeus unicolor new to Sussex at Cowdray. It's since been seen at Knepp and now it's been found at Ebernoe Common. I have heard its arrival in the south from its stronghold in the north has been dismissed as an introduction via timber movements. I have a problem with this as all the sites it's been found on contain old growth trees with lots of other saproxylic interest.

Anyway, having seen some 18 longhorns at Ebernoe, including three I have seen nowhere else, I was hoping for some longhorns this week. Despite beating plenty of hawthorn, all I saw were two Tetrops praeustus and two Grammoptera ruficornis. Mike did pick up two of the amazing Criorhina asilica from the glades which has to be my favourite hoverfly. However, it was tipulid larva Mike and I found in standing deadwood that was previous cleared of holly that proved to be most exciting. Mike took it home and it emerged as Tipula selene which is also RDB3 and is only the second time he has seen it in 20 years!

Ebernoe keeps throwing up surprises. There are also plenty of species there which I have seen nowhere else, such as this lovely leaf beetle on the willows in the glades Gonioctena viminalis. 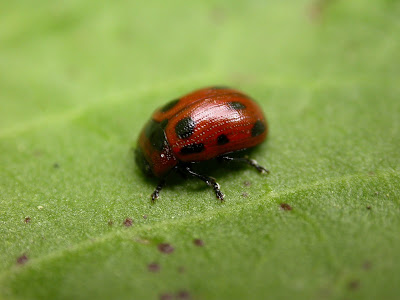 Find out about volunteering with the Sussex Wildlife Trust