The Great British Snake Off

Snakes are often thought of as exotic creatures to be admired (or avoided) on holidays in hotter countries, but Britain is home to three native species of snake.

When you think of snakes, you might picture a fat Boa Constrictor basking beside a Brazilian river, or a King Cobra rearing up from the dust of an Indian plain. Snakes seem too exotic for the often cold, wet and windy weather of the UK. But snakes are adaptable creatures, found on every continent but Antarctica. We actually have three native species in Great Britain, though none are found in Ireland. Legend has it that St. Patrick drove them out, but in fact they never reached Ireland in the first place.

To cope with our harsh winters, all of our snakes go into hibernation for the coldest months, typically from October to March. They emerge in spring, when they can often be seen basking to warm up. Courtship begins and by late summer, young pencil-sized snakes start to appear.

The Grass Snake is our longest snake, growing to well over a metre. They're usually a grey-green colour and most easily recognised by the black and yellow collar behind the head. They have dark eyes with round pupils, whereas adders have elliptical pupils in their bright red eyes.

Grass Snakes can be found across England and Wales, in areas with long grass often near water, including garden ponds. They’re excellent swimmers and regularly feed on fish, frogs, toads and newts. Grass snakes are our only egg-laying native snake. They lay 30-40 eggs in warm, sheltered places like piles of rotting vegetation and compost heaps. The young snakes are pencil-sized and hatch in August and September.

Grass Snakes are not venomous. They’re very shy creatures and will quickly slither away if they are disturbed. If they don’t have an escape route, they may play dead and roll onto their back with their tongue hanging out. As a last resort, if they’re handled, they can also release a foul-smelling liquid from their vent.

The most misunderstood: Adder

Our only venomous native snake, the adder has picked up a bad reputation and often inspires fear. Bites can occasionally be serious (and should always be immediately checked at a hospital), but they aren’t an aggressive species and rarely bite people. Most bites happen when a snake is handled or stood on.

Adders are our most northerly snake, found across England, Wales and right to the top of Scotland. They prefer wilder habitats than grass snakes, like heaths, woodland rides, and coastal dunes. They are rarely found in gardens.

They’re shorter but stockier than a Grass Snake, and are usually grey-brown with a distinctive zig-zag pattern along the back. Male Adders ‘dance’ to fight over females, entwining with each other and trying to wrestle the other male to the ground. Instead of laying eggs, females incubate them internally and ‘give birth’ to up to 20 live young. 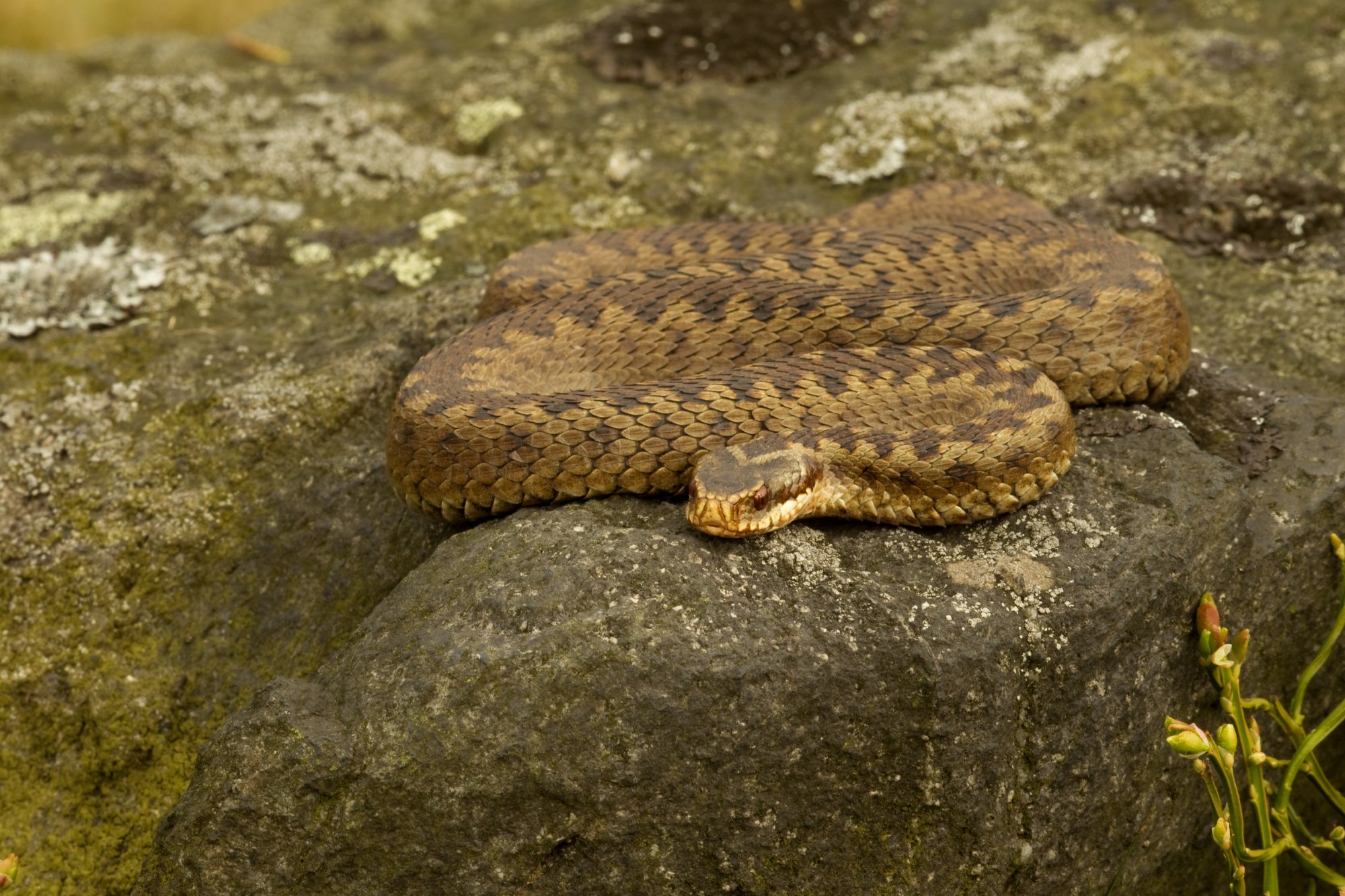 Snakes are secretive and hard to see at the best of times, but Smooth Snakes are so rare that very few people in the UK are likely to have seen one. They’re found across mainland Europe, but in Great Britain are only found on a few sandy heaths in southern England: in Dorset, Hampshire, Surrey, West Sussex and Devon.

Smooth Snakes grow up to about 70cm long, are slender and usually grey or dark brown, with dark markings along the back. The dark markings aren’t as distinct as an Adder’s zig-zags, and they have round pupils (compared to the Adder’s elliptical pupils).

Smooth Snakes aren’t venomous. They catch their prey with their teeth and coil their body around it like a constrictor, most often feeding on lizards and small mammals.

With their long, legless bodies, slow worms are often mistaken for snakes. But this widespread and commonly seen reptile is actually a lizard. They’re much smaller than adult snakes and, on closer inspection, have eyelids (unlike snakes) and a fatter, less-forked tongue. Like other lizards, they can shed their tail to escape from predators.

Slow Worms are found throughout much of the UK, but are absent from Northern Ireland. They live in a range of habitats, from heathlands and woodland rides to gardens and allotments, where they often hunt around compost heaps. 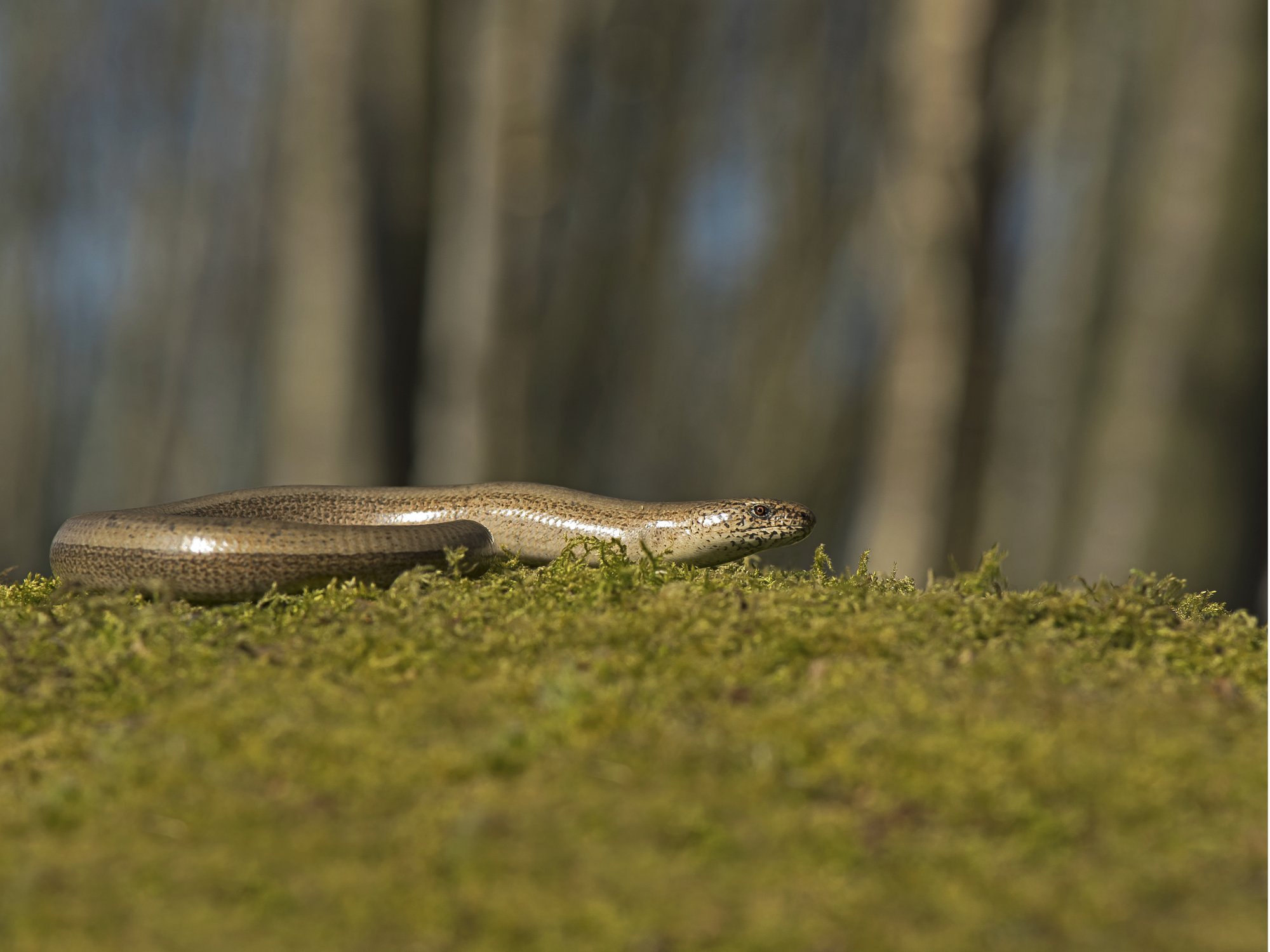