A couple of evenings ago, I tagged along on the first Sussex Shoresearch event of the year. The weather was grim and there were only five of us. Fortunately, Gerald Legg and Olle Akeson were there to guide me through the weird and wonderful world of...Worthing Pipe? 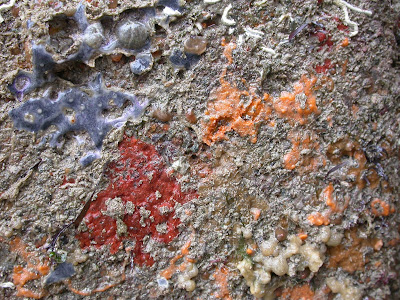 As promised by the title, sponge. I thought this looked like something from a paint-balling centre or Jackson Pollock's hangover. The blue one is Terpiosa gelatinosa and the blood red one is Microciona atrasanguinea. I think there is also breadcrumb sponge in there (the beige one) and maybe Amhilectus fucorum. We saw at least five sponges. I quadrupled my sponge list. 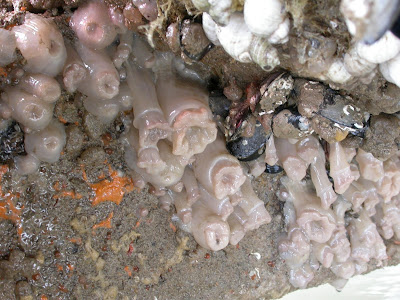 As promised, blobs. Great big massive dangly blobs. These were the biggest anemones I had ever seen and were all in one huge cluster. Turns out this is actually a common species that is rarely exposed. As you'll never get me under the water, I'm really lucky to have seen the plumose anemone. Think this was the star of the show! 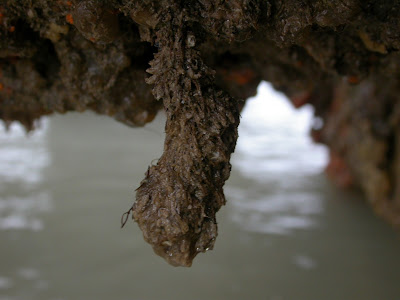 As promised, squirts. This leathery looking thing is actually an alien species. This is the leathery sea squirt and is quite possibly the most ugly looking thing I have ever seen. I doubt I would have ever recognised it as a living thing!


As promised, a pipe. Worthing Pipe was an early attempt at the Channel Tunnel. One by one, Victorian's were loaded into the pipe like bullets in a gun and propelled at high velocities across the channel using compressed air. The regular 'Fop', 'Fop' followed by jubilant screams was a frequent soundscape of this part of the Sussex coast. In France they enjoyed day trips for as little as five guineas. It was briefly successful until Queen Victoria herself became lodged in the pipe and a 30 mile chimney sweep's brush had to be deployed to rescue her.


OK, it was just an old Victorian sewage pipe. There was something very Iain Banks about this structure though. My left ear was freezing!

On the left here is Poseidon, God of the Sea, AKA Dr Gerald Legg. Thanks Olle for the photo. On the way back I found half a Painted Topshell. I couldn't believe how big it was, can't wait to see one of these alive. I really didn't think Worthing Pipe would be that exciting but that was one of the strangest and surprising hours of natural history I've ever done. I can't wait for the next one!