OK. I'm about nine miles into one of my farm surveys somewhere near Bishopstone in East Sussex and have had a good day with arable plants including one lifer. That all seems so tedious now, I'm going to have to write a separate blog about this. I'm keeping one eye on the ground for arable plants when this happened in my head.

Aaaagghhhhhhh!!!!! was emitted rather loudly as I scrambled to get a pot out of my bag. That was unexpected, my heart's still beating like a big clock. Thanks to Mark Telfer for his pretty instant help on this species' recent records. The following is derived from Mark's notes: It was last seen alive in the UK 23 years ago at Thursley in Surrey and last recorded as fragments representing a breeding population 19 years ago near Thetford. There were only two other records in the 19th Century but it is stated that it was much more frequent as a vagrant in the 18th Century where it was recorded from East Sussex. So it's not a county first but it is the first in Sussex since the 18th Century. Pretty damn cool indeed. Especially as it featured in a blog I wrote about three years ago which makes for interesting reading in the context of how few people have actually seen this alive in the last 100 years or more. I mean, how many people have written a blog about seeing this and then actually seen it three years later? Kind of freaks me out thinking about it. And also asks the question, "which family member DID I trade in?".

Enjoy some more photos of the beast. 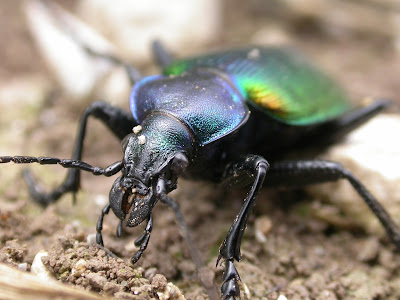 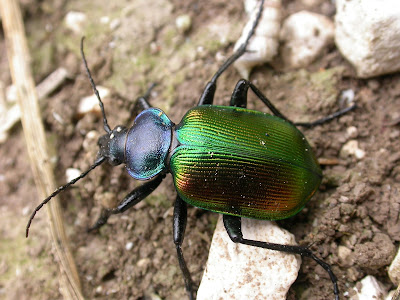 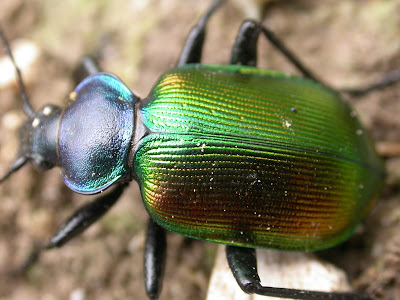 I found it walking along the 50 cm or so gap of bare ground between a winter wheat field and a set-aside margin, it wasn't a particularly interesting part of the site, just at the bottom of a chalk grassland slope with scrub. I think it's very unlikely that this represents a population, I didn't see any more and in it's home territory, it is more of a woodland species preying on the larvae of processionary and tussock moth larvae. Not something at all represented on the site I'd think. It was very fresh and Mark thinks this suggests it's more likely to be a vagrant. In fact, as the crow flies, it was only 1.5 miles from the coast. So, was this just amazing luck or are there more out there? It's hard to miss, about the size of Carabus violaceus. It just goes to show, that if you walk around anywhere long enough, eventually something amazing appears. I was also really pleased to bump into the farmer at just the right time to show him. Amazing. I'm not so gutted that I had to miss the Pan-species Listing recording weekend in Norfolk now due to work commitments. The find of the decade?!