A few weeks ago I'd never heard of Columbus crabs Planes minutus but then Steve Trewhella started posting pictures of them he had found in goose barnacles and other flotsam on beaches in Dorset. After a walk along Brighton Beach on Sunday, I did indeed find several common goose barnacles Lepas anatiferabut not the kind of large fresh clumps I had seen in Steve's images. So, yesterday while looking at the wind direction and ferocity of Storm Imogen, I thought it would be worth a look this morning on Brighton Beach. So Olle Akesson, Michael Blencowe and I met in a miserable car park by the Marina. It was pouring down and very cold and I was wondering what I was doing there. As I said though, "fortune favours the bold."

Ten minutes later we found a big patch of common goose barnacles right by the Marina and there, sticking up for all to see, was a tiny claw! There it was, the first known record of this incredible species for Sussex!

We walked along and found several more patches of goose barnacle and then we stumbled upon a partially buried patch on a buoy that yielded another four individuals, this time showing how varied they can be. Here is Little Red, Little Blue, Christopher Columbus's Ghost and Weetabix-head. Who is your favourite? 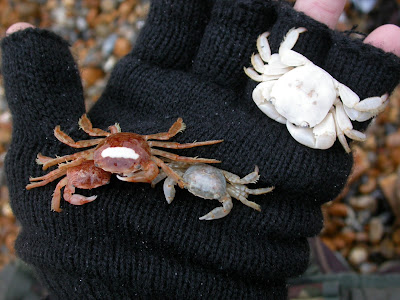 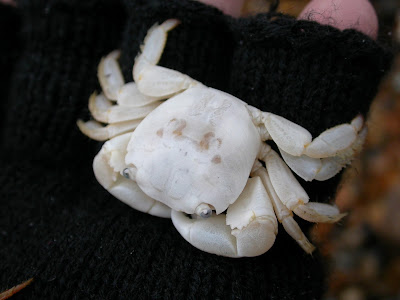 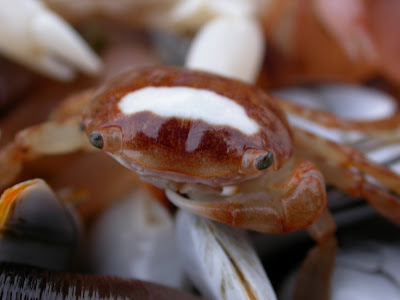 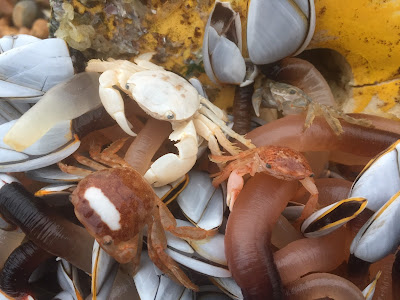 My favourite response on facebook to this image was: "It's an itteh bitteh crustacean commiteh."

And here is their habitat! 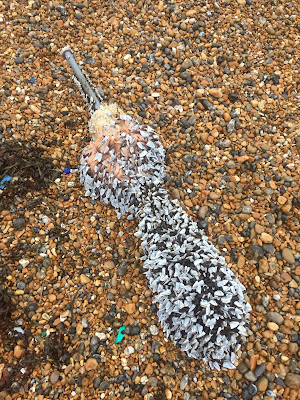 So what is a Columbus crab? It, like the goose barnacles, is an entirely pelagic animal (yes, they are both crustaceans). The barnacle attaches itself to flotsam (trees, boats, floating plastic bottles!) and the crab lives among the barnacles. It can also live on turtles and in bits of floating rubbish (a number turned up recently in an old rope). So these little guys may well have come all the way across the Atlantic! What a life! I thought the name would come from this very behaviour but it seems that it is actually named after Christopher Columbus who could well have been the first to see this animal! This is likely to be the first record for Sussex and could be the furthest east in the UK but I reckon if you went out looking for them, you could find them even further east than this! How long until they reach Rye Harbour and Dungeness?

It's time to treasure our precious natural world. We need it more than we know.https://t.co/gpyHVgyN9a pic.twitter.com/cJkGuZcBBz

Ivy Bees establish colonies in the grass, look out for lots of burrows, and #bees flying low . This bee is harmless and are active at this time of year as they feed on ivy flowers. pic.twitter.com/5gkrZJuuq2

Reminder: Woods Mill nature reserve will be closed to the general public today - Saturday 18 September 2021 - for a private event. Thank you for your co-operation. pic.twitter.com/ZLqpuGB9R0

Help wildlife by raising money for us