So we started the July visit of this year's survey of the Marline Valley invertebrates. About 20 minutes in I got a really odd looking bug in the suction sampler. I first thought it was an immature shieldbug of some kind until I had a closer look when I realised it was an adult. It's pretty much ALL scutellum. I assumed it was some weird mirid. Later on a second animal was swept. Both were from areas with dense Dyer's Greenweed.

I just got home and realised it's not a mirid and after a bit of searching online found something that it remotely looks like. I think it's in the genus Coptosoma, possibly Coptosoma scutellatum. It's known to feed on legumes and Genista is mentioned as a food plant. It's in the family Plataspidae that as far as I can tell is not a UK family. Two suggests more than a random occurrence, it must have bred here. It must be able to fly but it looks completely flightless. A new shieldbug family for the UK!

Tristan Bantock has just told me that it's the only species of this genus in France and it must be this species! He says it's likely to have come in in last year's heat wave, which matches what I was thinking as we saw two adults there today. 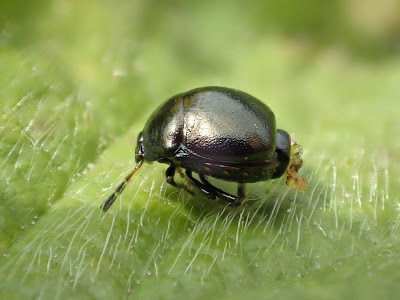 This is the first species I have ever recorded new to Britain so I am delighted that it's also a family new to Britain! It's so strange looking. Like it's been stretched sideways. It's basically a butt with a head. Or a walking purse. I need to go and celebrate this. But first, big thanks to Mike Edwards (for lending me his suction sampler today after I broke mine - this has taught me that I can NEVER be without it again), Alice Parfitt for managing such amazing meadows for Sussex Wildlife Trust that they are the first port of call for new colonists, Ted for sweeping the second individual (it's took me 41 years to get a first for Britain and this lad gets one on his work experience) and Glenn Norris for his fantastic description of the beast that I will not repeat here! 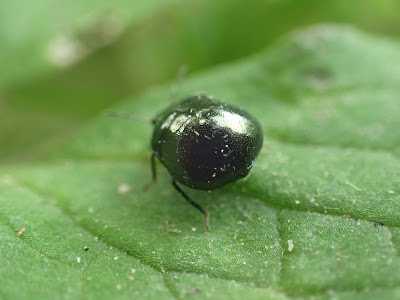 Online I see that they are known as 'soot sprites' according to Wikipedia. Which is very cool as that is the name of the creatures in Spirited Away... 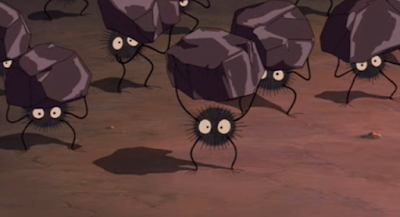