Handed to us on a root plate 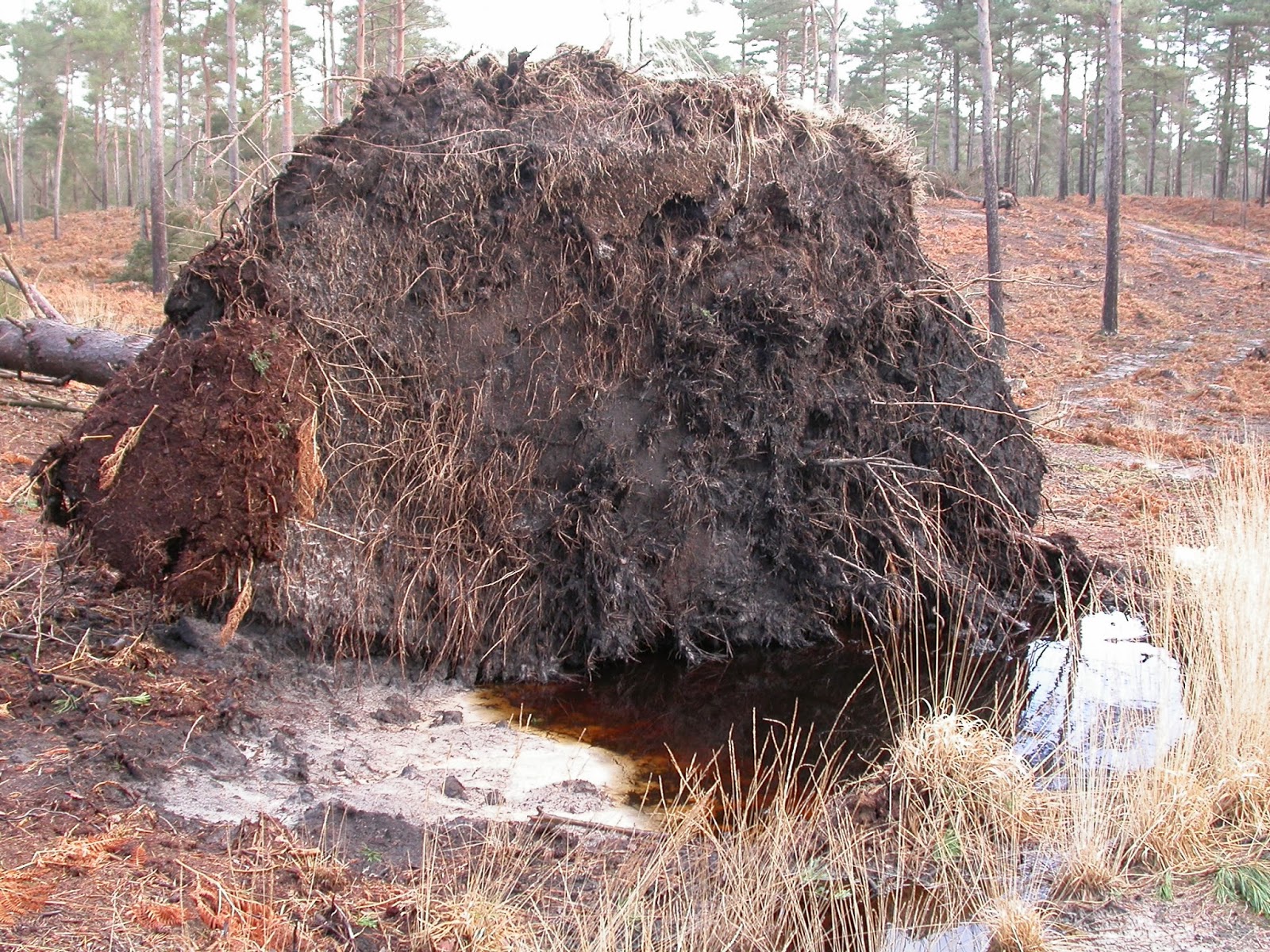 Graffham Common is not just your typical 'trees off heaths' project. We were not starting with a featureless conifer plantation, there were already some nice sunny glades, areas of wet heath and big old granny pines in among the plantations. We surveyed theses areas extensively before starting management there, so that we enhanced what was already there, rather than replace it with what we thought should be there. One of the real surprises, even from pitfall traps, was the number of saproxylic (living on deadwood) species there. I've almost got enough to put together an SQI for the site to calculate the species richness of the nature reserve and it's scoring surprisingly high.

In 2012, in a five minute period on a single fallen birch log with razorstrop I recorded Diaperis boleti (RDB2), Colydium elongatum (RDB3) and (just confirmed by Peter Hodge) Ampedus cinnabarinus (RDB3). That is a really good five minutes of recording for a conifer plantation! Given the habitat, you would expect Diaperis, but the other two? Colydium is a predator so it goes where the food is and I have now seen it on birch and (I think) pine. I rolled this log yesterday and found this odd looking larvae with two upward pointing black hooks which I believe is probably Colydium elongatum. Anyone else seen the larvae of this beast? 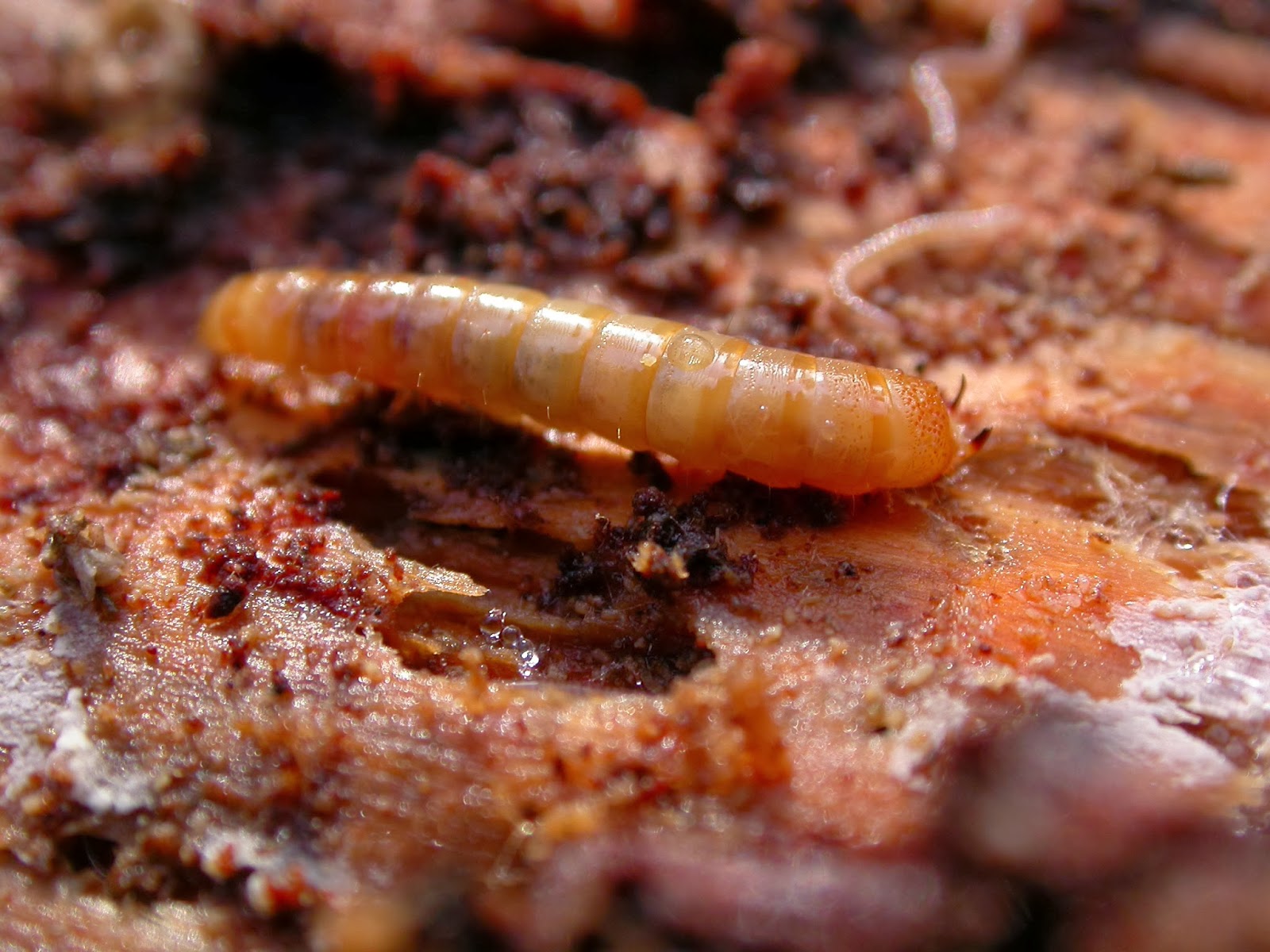 But Ampedus cinnabarinus on birch? I have only seen this once before under beech bark at Cowdray, the expected habitat according to Peter Hodge. Maybe though we are missing the real resource needs?

If we can replicate at least some of those needs on a site like Graffham, we can enhance a site for such species rather than create a uniform heathland that replaces it. What we have done there is leave more trees than would usually be left (about 30% canopy cover). Connecting the existing glades, leaving some areas wooded, opening some areas right up and providing a range of different microclimates. What we hope to achieve is something more like parkland but with pines and birches instead of oaks and heath instead of grass. The best of both worlds. I believe that shelter is a really important resource for invertebrates but is often overlooked.

When the felling happened, we left a few trees as deadwood too and even had a few 'hung up'. These blew down in the storms but on a visit there yesterday I was pleasantly surprised by how many had blown down. We are going to leave as many as we can without negatively affecting the management of the future heathland. The great thing is these winds were predominantly from the south, so the root plates are all facing south. Fantastic habitat for all sorts of things but they should be really good for aculeates. 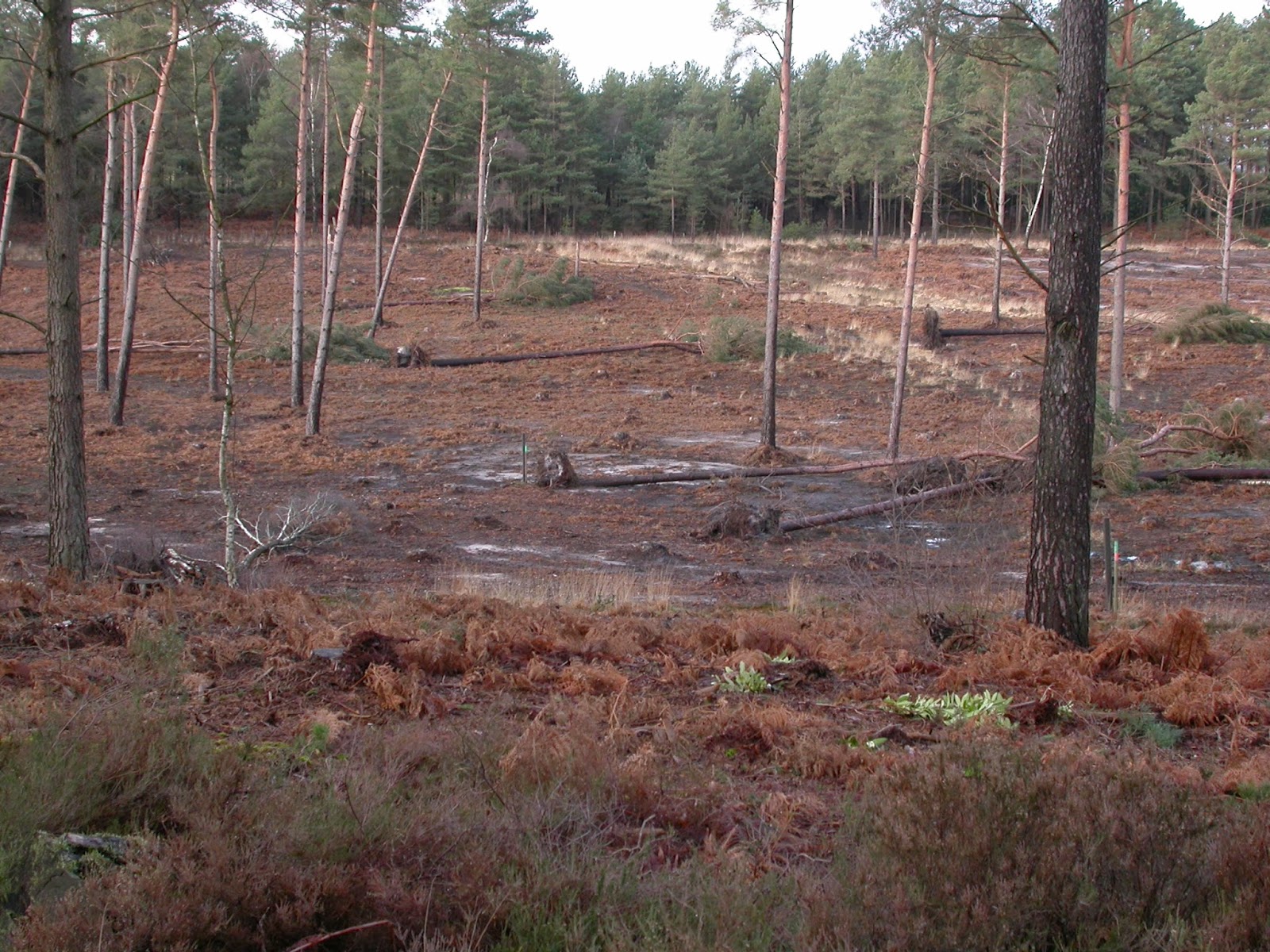 Some like the eight foot tall root plate above, have  produced their own peaty pools too! Or this one that has pulled up a great plug of mineral soil. 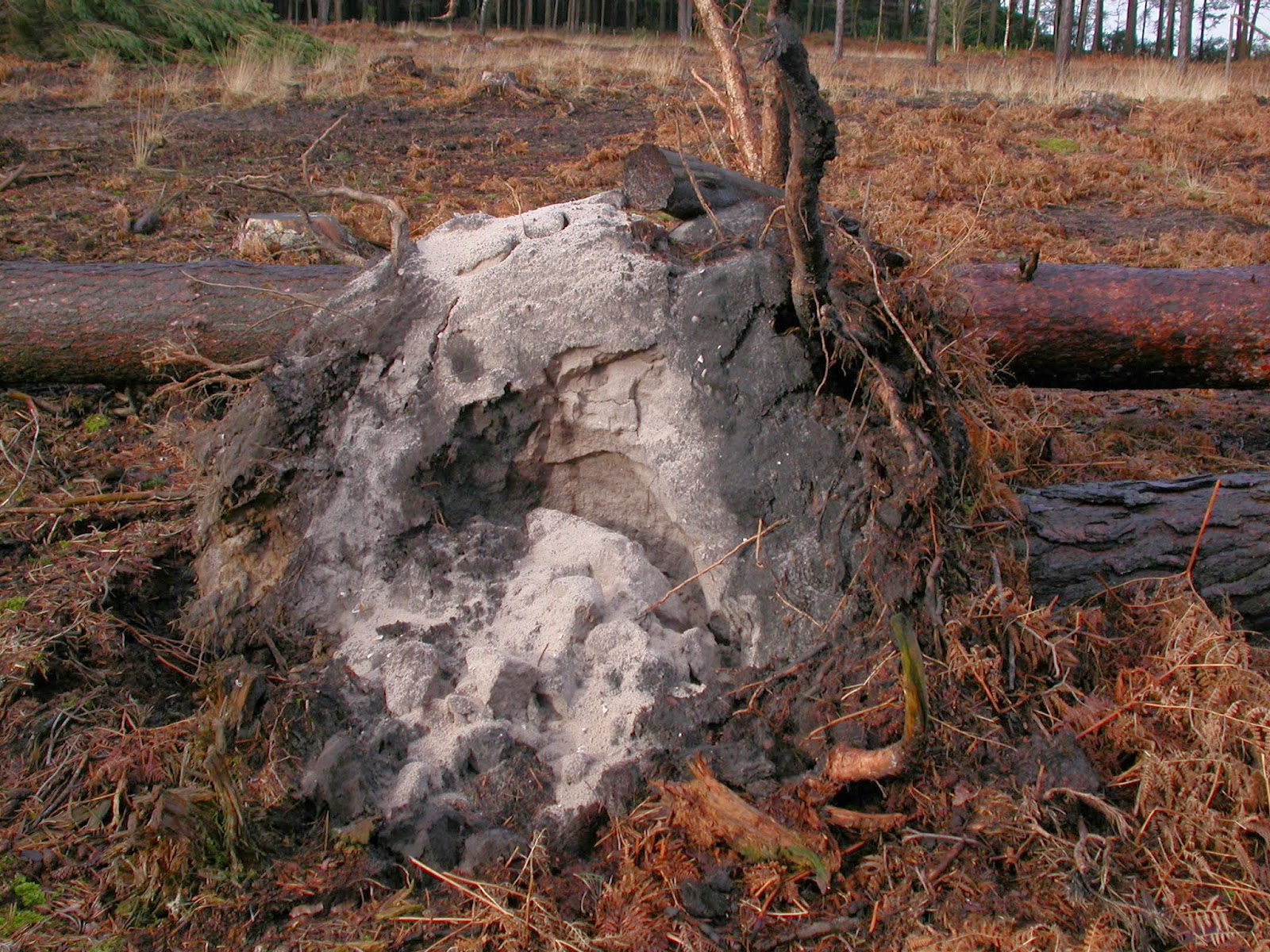 And this one with its exposed roots. 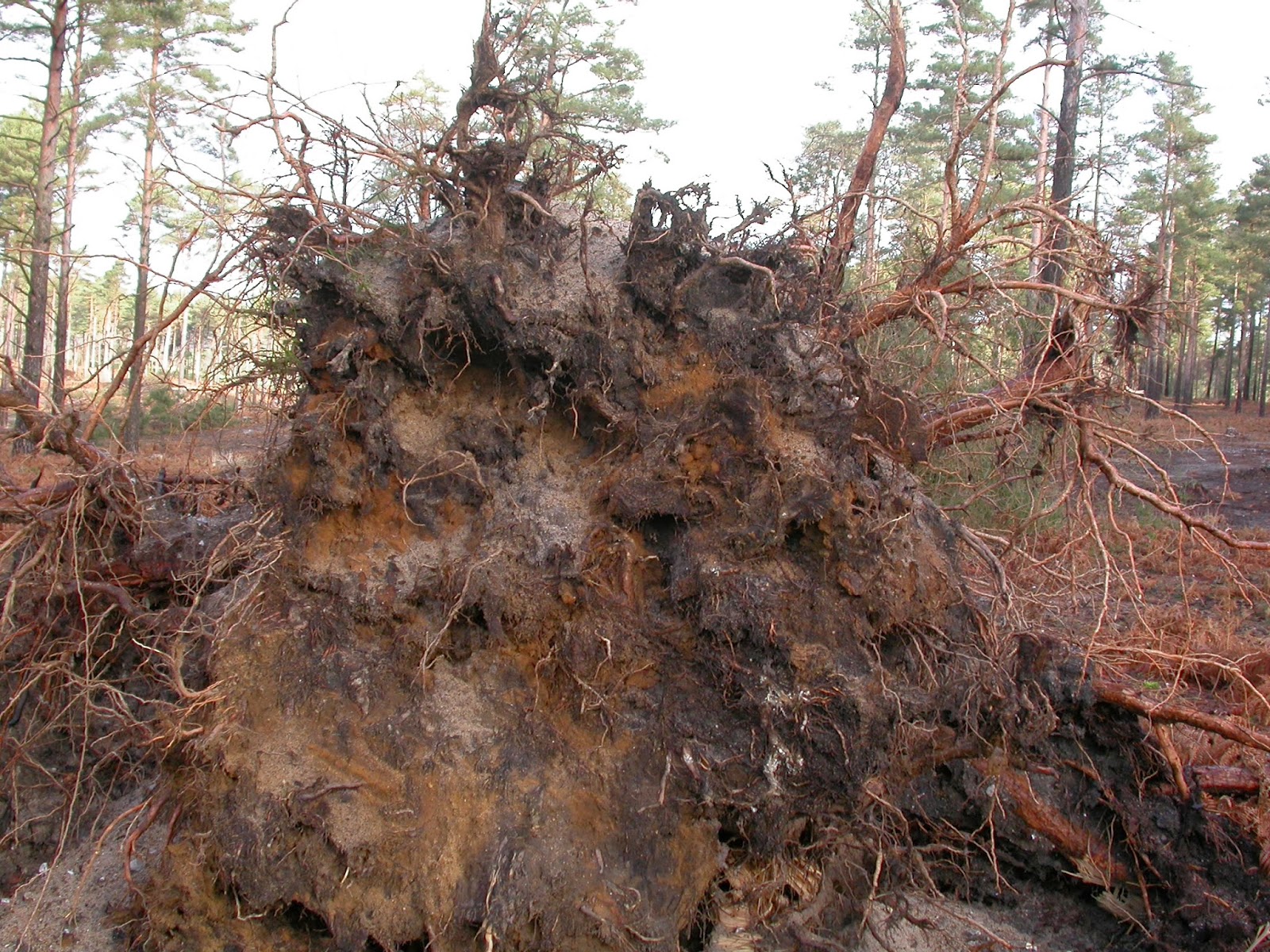 There are few snags too where the tops just blew right off! I'm betting there will be a woodlark on there by the end of the year. 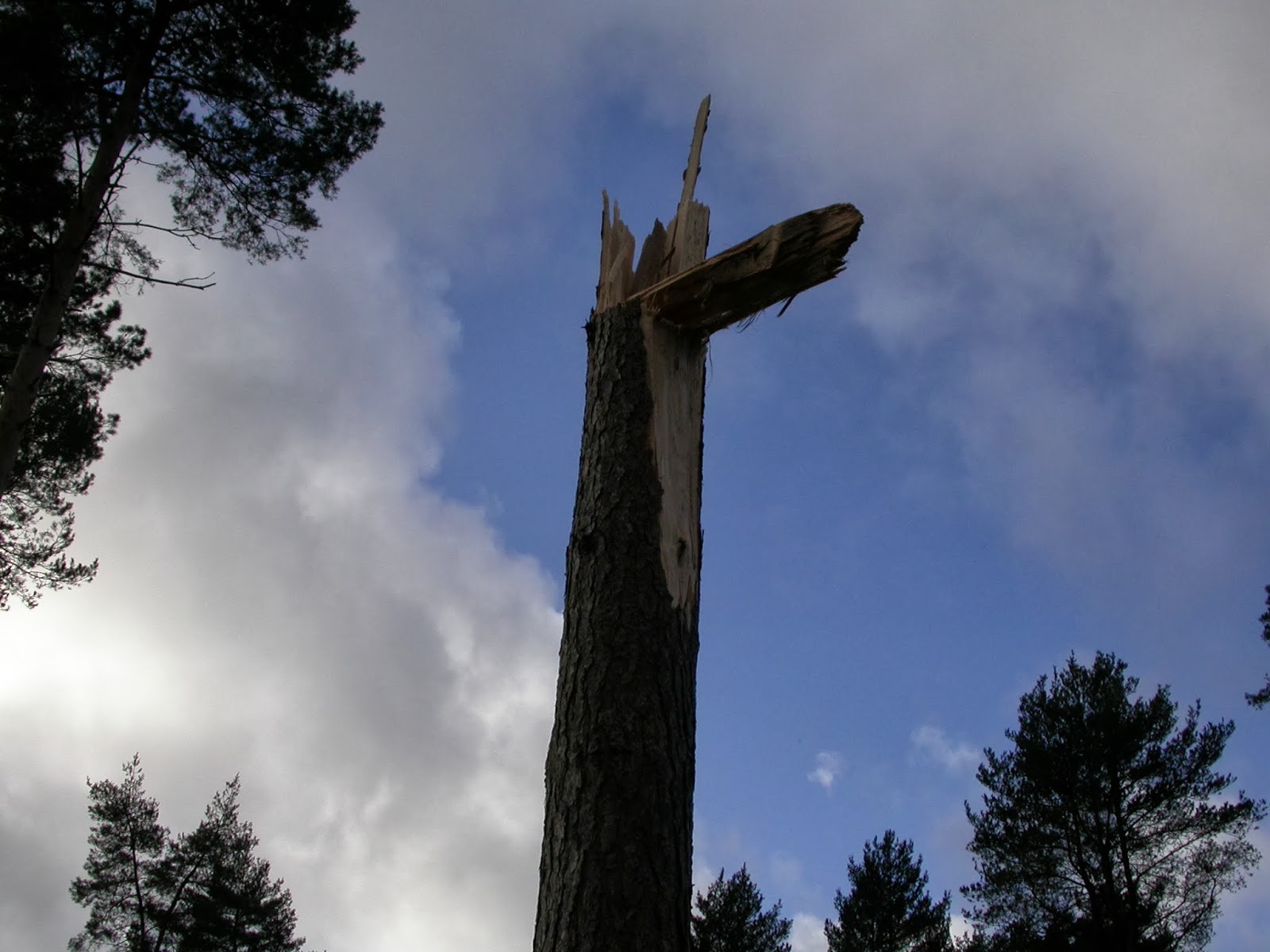 I can't wait to see how this site develops. Heather, bell heather and cross-leaved heath is growing well on site and the major management issue currently is staying on top of bracken control. I'll be repeating some pitfall traps and quadrats this year that we set up in 2009 and again in five years or so. Watch this space! Finally a big congratulations to Jane Willmott for making such a success of this project!