Black Stork Down... by the Seaside

In my job as one of Woods Mill’s summer wardens I get to see my fair share of exciting and unusual wildlife. But it certainly doesn’t stop me going in search of other wildlife encounters, even on my day off! Having attended a ‘Spiders of Sussex’ course put on by Sussex Wildlife Trust, I decided to spend a day down by the coast looking for purse-web spiders (Atypus affinis). This species is the only known British member of the primitive spider family, which also includes tarantulas and funnel-web spiders.

We’d been told that there was a population of these remarkable little ambush predators along the famous cliffs at Beachy Head. How hard could it be to find them in such a restricted area? Well it turns out harder than I thought! I searched high and (mostly) low for their distinctive ‘purse’ webs. But I had no luck; I think I must have overestimated the power of my ‘spidey sense'.

However something showed up that I would never have expected. My friend, probably bored of watching me traipse back and forth through the grass, was looking out to sea. She spotted a huge black bird drifting inland, attracting a bevy of seagulls. It circled us heading up towards the Beachy Head road, then back towards the sea and soared off down the coastline. We weren’t totally sure what it was, but luckily we’d grabbed a few snaps to identify it later.

It turned out to be a juvenile Black Stork (Ciconia nigra), an extremely rare sighting in the UK, with only around 3 seen here annually! The adult birds are black, with a purple and green gloss to the neck feathers, and the legs and beak are bright red. These birds stand nearly one metre tall, can have a wingspan of over two metres, and are capable of flying up to 500km a day during migration. They feed mostly on fish, but also on amphibians, insects, bird nestlings and even tortoises.

They are much more shy and solitary than the white stork, nesting in dense forests around wooded wetlands, as well as on rocky outcrops. They have a broad geographical range from Germany to right across Asia. This young bird would have probably spent the spring and early summer in Eastern Europe and was probably on its way to winter in Tropical Africa. 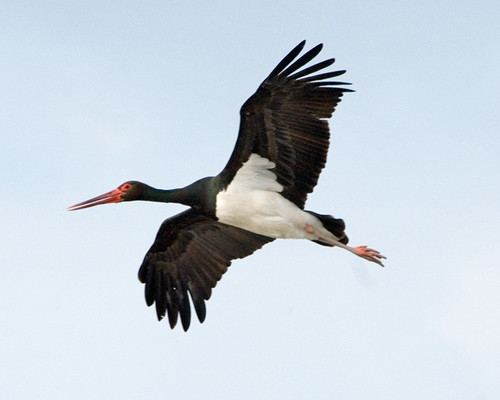 Safe to say when we found out what it was we were pretty chuffed to have seen one. It goes to show what a great place our coastline can be for spotting birds coming in and out on their migrations. Sites like Beachy Head provide excellent vantage points to watch offshore migrations and their prominence also makes them a gathering place for migrant land birds. So next time you go for a trip to the seaside, be sure to keep your eyes to the sky. Who knows what you might see.

If you do see something unusual, be sure to let us know.